One of the most common questions people have about Old-School Essentials is relating to the range of experience levels the game covers (14) and whether there are plans to expand that with a future supplement.

Specifically, people who ask this question are mostly interested in whether there will be a Companion expansion for the game, in the vein of the BECMI Companion set. (This set — along with the accompanying Master set — added content to take characters up to 36th level. And let's not even get started on the followup Immortals set!)

Are There Plans for An Old-School Essentials Companion?

The simple answer: no, there are no plans.

As Old-School Essentials is designed to be compatible with the Moldvay/Cook/Marsh Basic/Expert rules (which were a precursor of the BECMI sets), level advancement in the game reaches its natural conclusion at level 14. Back in the 1980s, there were plans for a Companion set to expand the level range up to 36 (it was even mentioned in the Expert set), but this set never manifested as part of the B/X product range. B/X is hence a game which covers level 1 to 14 only.

Personally, I regard this quirk of fate (i.e. that the B/X Companion set never manifested) as one of the killer features of B/X and hence of Old-School Essentials. In all my time as a referee, I can count on two fingers the number of characters who ever advanced beyond 14th level — and that was in the days of childhood campaigns with incredibly regular play and insanely generous treasure hoards! My feeling then is that rules to take characters up to 14th level are perfectly sufficient for decades of play and additional reams of content for the levels beyond just isn't necessary. I also feel that the game doesn't extend well by simply continuing the escalation of hit points, THAC0, spells, and so on.

There's also the problem of demihumans, whose maximum levels are already lower than 14. An expansion to the game would either need to relegate demihumans to the lower levels, retroactively alter their level limits, or tack on some other means of them advancing that isn't "levels" in the normal sense.

So the decision to keep Old-School Essentials within the 14 level limit laid down by B/X was a very conscious one and one that I absolutely stand by.

However, instead of a supplement that simply adds "more levels" to the game, I do have some very rough notes on a supplement for extending play beyond the maximum levels of the Classic Fantasy classes. This would detail rules for high-level topics such as domain management, mass battles, and possibly planar adventuring, along with rules for further character advancement not tied to simply accumulating astronomical XP counts and the associated giddy increases in hit points, THAC0, saving throws, spells, etc.

These are only the vaguest of ideas, however, and this product does not feature in any Necrotic Gnome hypothetical publication schedule for at least the next 2 years. 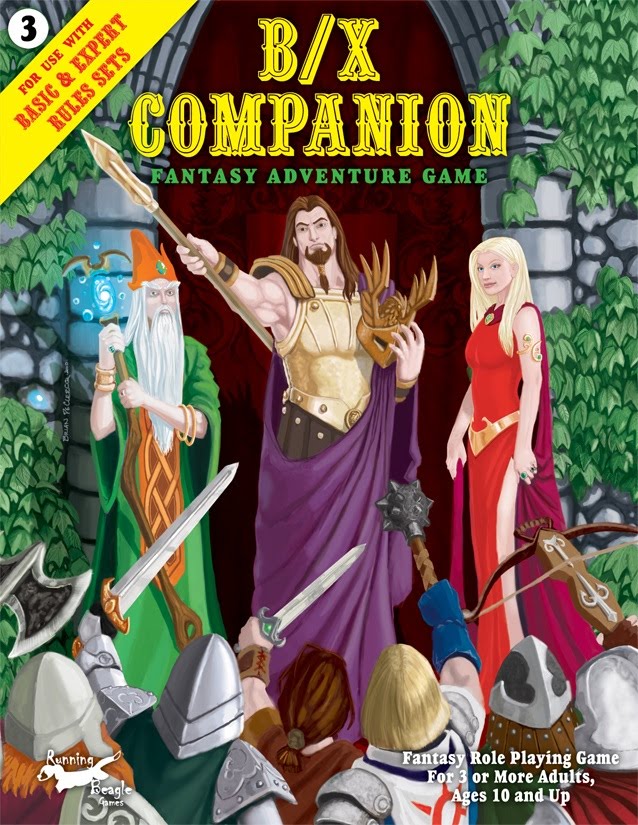 This is a great book which imagines "what if?" the promised B/X Companion set had manifested. As such, it's explicitly designed as an expansion to the Basic/Expert rules (and is thus 100% compatible with Old-School Essentials).

It's available here in PDF and from the author in print.

The BECMI Companion and Master Sets

As mentioned above, TSR did publish books taking the Basic product line up to 36th level later in the 1980s. The BECMI sets are (obviously) designed as a continuation of the Basic and Expert sets designed by Frank Mentzer, not the Moldvay/Cook/Marsh Basic and Expert sets which Old-School Essentials is compatible with, but the differences are pretty small. It'd be easy to use the BECMI Companion and Master sets with Old-School Essentials.

These books are available in PDF here (Companion) and here (Master).

Another option is the Rules Cyclopedia, which compiles, re-edits, and slightly revises the rules in the BECMI sets.

This is available here in PDF and print-on-demand.

Some kind of planar supplement (magic, classes, monsters) is quite likely at some point. Higher level spells still feel unlikely, for the reasons discussed in this blog post.

>Is OSE compatible with BECMI Adventures of B & E level?

Totally compatible. There are virtually no differences at levels 1-14.

Is OSE compatible with BECMI Adventures of B & E level? If not (you say above the differences are small) is there an adaptation guide?

“Yes, a psionics book is high on the list of next OSE projects. A mythic Asian genre rules book is also highly likely at some point.”